Would you be star struck? 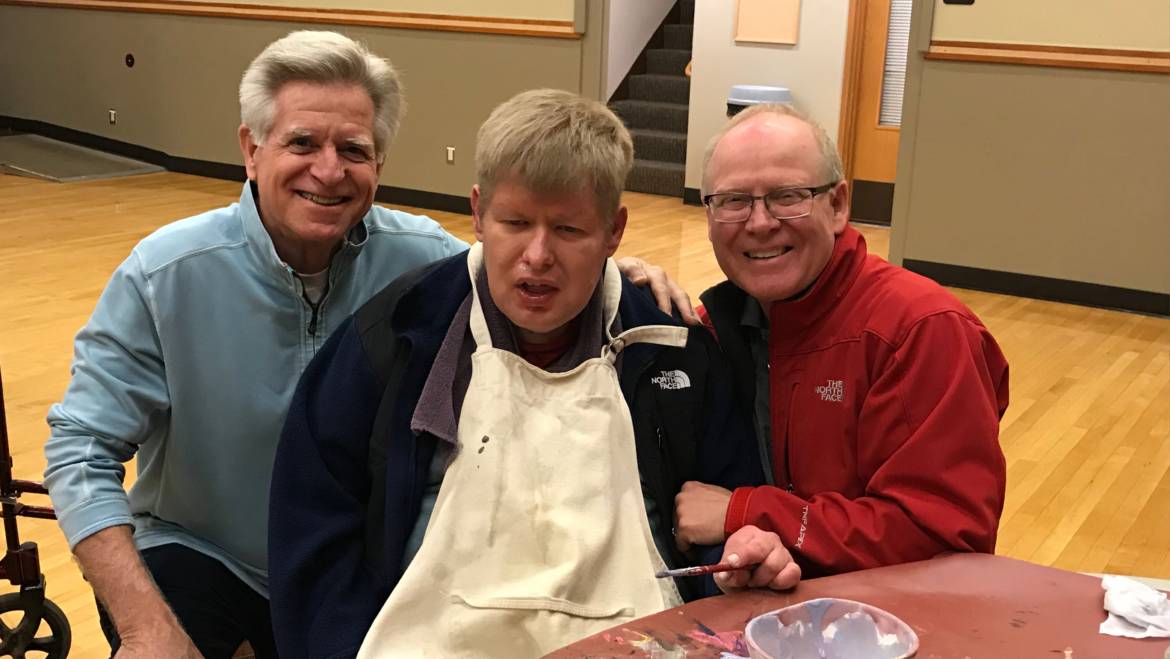 If you had the chance to meet and talk to a TV celebrity that you admired, what would you do?  Could you look them in the eye?  Would you say anything?  What would happen?

Nick has always admired a local news reporter, Dan Lewis.  Nick got a publicity photo of Dan years ago and it was thumbed tacked on Nick’s wall in a prominent place.   For decades he has mentioned Dan Lewis and our local ABC affiliate, KOMO-News 4, as well as Dan’s co-anchor Kathi Goertzen.  After we told Nick that Kathi passed away in 2012, he quit mentioning her.  He only talked about Dan Lewis and the news.  Nick has missed him on the TV news since he retired from the anchor desk in 2014.

A year ago, Karen, Nick’s sister, met Dan Lewis at a annual charity auction held to benefit Bridge of Promise, and Bridge Academy, the day program that Nick attends.  She told Dan about Nick’s admiration for him and his news reporting.  Earlier this year, Nick had the opportunity to meet Dan at his day program.  I wondered what would happen.

Well Nick was excited to actually meet Dan, but he didn’t talk to him.  Dan was very kind.  Nick even had his picture taken with him.  He still didn’t say anything to this man that he had admired for decades.  Not a word, until he got into the car and then he started.  “I see Dan Lewis.”  I got a new picture.  You put it on my wall.”  “I see Dan Lewis.”

I wish that Dan could have heard how excited he was.

Last night, the 2018 annual dinner and auction was held and we knew that Dan Lewis would be the Master of Ceremonies again this year.  We were in town for the auction and decided to go.  We were all looking forward to going.  I thought that maybe Nick had been shy previously when he met Dan because we hadn’t prepared him.  So I talked to Nick over quite a few days about getting the chance to see Dan again.  He wanted to get Dan’s autograph on the publicity picture on his wall.  I told that was a great idea.  We roll played what he would say to Dan, how he would ask for the autograph, etc.  I believed that he was excited and prepared.  This time would be different.

We dressed up, it was a great night.  Nick kept saying.  “I meet Dan Lewis.  He sign my picture.”  He was excited.

We got to the venue a little early, and we registered.  Nick showed a couple of people the picture that he wanted Dan to sign.  He kept looking around at all the people.  He kept asking.  “Where Dan Lewis?  He not coming?”  Reassuring him that Dan would be there, I kept looking around too.

After the silent auction finished, it was time to take our seats for the dinner to start.  Nick spotted Dan as he approached to podium to start the proceedings.  “There he is.”  I told him that we would have to catch up with Dan later because he was speaking now.  Nick seemed disappointed.  After dinner, Dan purposely made his way over to our table.

“Nick I heard that you want me to sign a picture?  Is that right?”  Nick didn’t say anything.  Surprised, I said, “Nick, Dan Lewis is here to sign your picture.”  Nick kept looking down at the table.  Arden turned Nick’s chair around a little so he could face Dan.  Nick kept looking down, not saying a word.  Dan was very sweet and signed the picture.  He had to get back to his duties, so he hugged us and Nick, and thanked us for all that we do for Nick.  So amazing.

I think that Nick was star struck.  Nick has admired this man for so many years that he doesn’t know what to say to him when he meets him.  As I have thought about it, this is a perfectly normal response for a person to have when meeting someone famous who they have admired.  It was pretty special to me to witness Nick’s normal emotional response.

Nick really wanted to talk to Dan Lewis.  He had practiced what he was going to say.  He anticipated the event and when the moment came, he couldn’t say anything.  Yeah for normal.  It was a win.  Since Dan is such a big supporter of Bridge of Promise and Bridge Academy, hopefully Nick will have more opportunities to meet him and eventually will be able to talk to him.

If you want to get a copy of the book about my journey with Nick as soon as it is available, click here to sign up.  Please share this blog with others. Don’t rely on your FaceBook feed to see all of my posts, sign up to get my blog delivered to your inbox directly.