Inspired by the Great Masters. 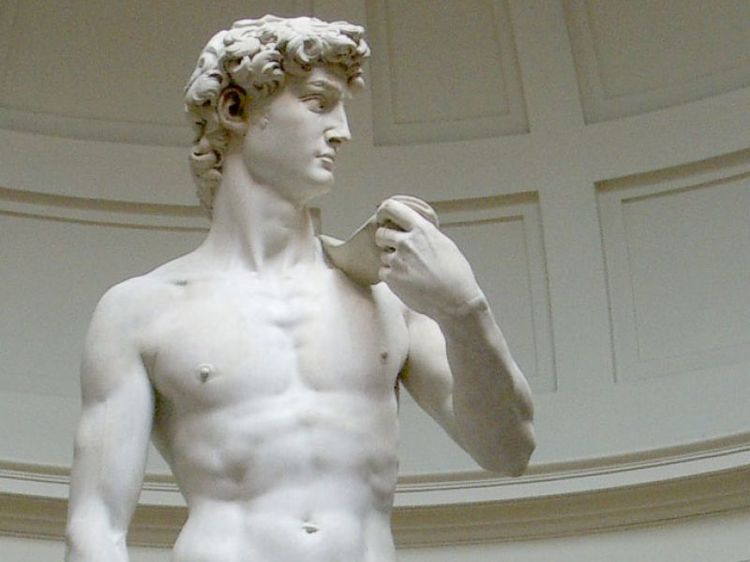 May 3, 2018 evagremmert Achievement, Happily Ever After, I am Nick's mom, I can do hard things, Inspiration, Lennox Gastaut Syndrome, Leonardo da Vinci, LGS, Michelangelo, Raising a child with disabilities 1 Comments

Images representing the statue created by Michelangelo and unveiled in 1504, are everywhere in Florence.  You can purchase small statues, pictures, postcards, even aprons and potholders.  There have been many great artists, architects and scientists who have lived and worked in Florence.  The city is very proud of two of them, Leonardo da Vinci and Michelangelo.

While here, I have learned many things about these two great men.  Before this trip I knew a little bit about some of their work.  I knew that both of them discovered things that changed everyone’s view of what was true and correct in art, the sciences and architecture.  Their personal desire for learning and their creative genius blessed the entire world.

Neither one of them were born into privileged circumstances. Since I obviously don’t know them personally, my conjecture is based on the stories handed down to our generation.

It is said that it probably was a great blessing that Leonardo da Vinci was not traditionally educated as it allowed his mind to freely investigate great questions of scientific theory.  If I had been born into his social circumstance of illegitimacy in the working class, I don’t know if I could have thought of it as a great blessing.

Michelangelo’s mother died when he was six and he was raised by a nanny until he was sent to school in Florence and a little later apprenticed at age 13 to a well known painter.  His talent quickly became obvious but his living situation was dependent on the sponsorship of wealthy benefactors.  Within six years he was commissioned to work in Rome at age 21.

These great men created their own opportunities, they didn’t allow their natural circumstances to hold them back.

In our day, there are those who believe that only the lucky ones are successful.  I often hear people say, “I don’t have the money to…” Or “I didn’t have the same opportunity to be educated…”

Neither Michelangelo or Leonardo originally had the money or education to become great genius’.  However they didn’t allow their natural circumstances to inhibit their life journey.  They both had a natural thirst for learning and experimented on what they learned as they gained more knowledge and experience in art, architecture and the sciences.  I did hear the story that they didn’t particularly like one another.  I don’t know if that is true or is just part of Florentine storytelling for tourists.  Perhaps great genius is not a cooperative effort.

We don’t know our own capabilities, we don’t know what the trajectory of what our life can be.  Florence Italy was a small city 500 years ago, with its political intrigue, social problems and financial crisis.  Even with all of that drama, which sounds incredibly similar to today, two of the worlds greatest genius’ emerged.

I am determined to learn to live in a way that creates possibilities. Both Michelangelo and Leonardo were not encumbered by their initial life stories.  Their achievement was not inhibited by excuses and this personal determination changed our world forever.

Please share this blog if it resonates with you or you know someone who might benefit from it.  If you want to get a copy of the book as soon as it is available, be sure to sign up.

Tags: Achievement, Happily Ever After, I am Nick's mom, I can do hard things, Inspiration, Lennox Gastaut Syndrome, Leonardo da Vinci, LGS, Michelangelo, Raising a child with disabilities