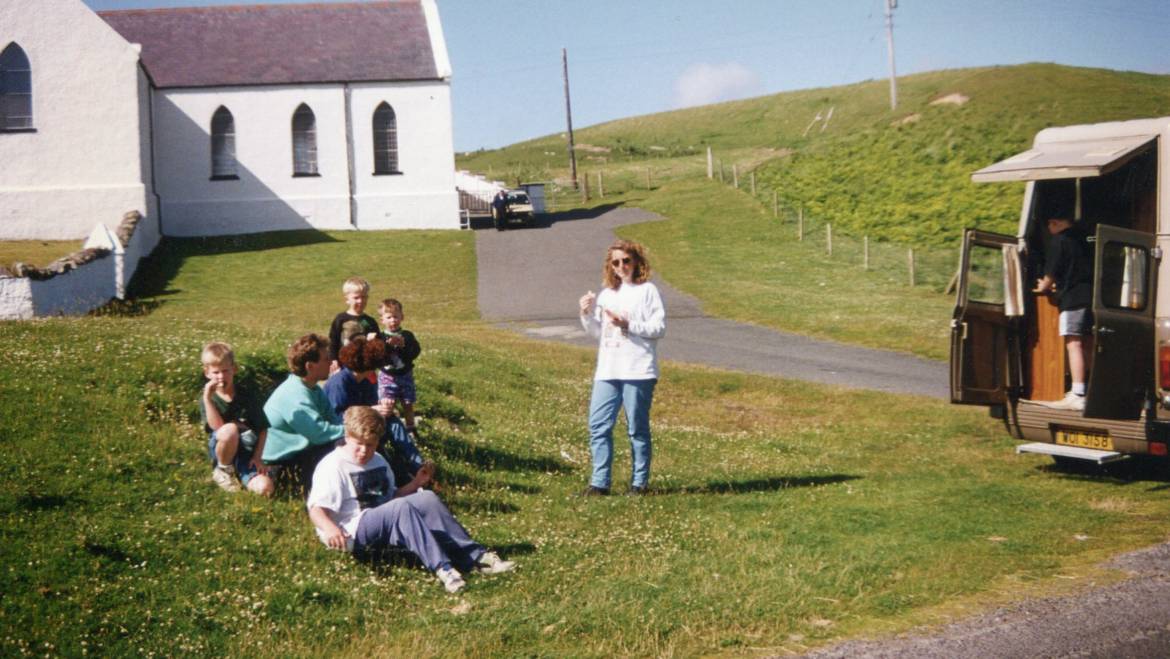 This past weekend, Nick had a bit of a cold.  I was so grateful that he had learned to blow his nose.   He was 13 then.

Back in the summer of 1993, (that sounds like the beginning of a song!) we took an epic trip to Ireland with our extended family.  Arden and I had purchased a camper van that would hold all 11 of us.  You can see the back end of the van in the picture.

Arden and I had our 4 kids and the other 5 on the trip, were Darren and Rosie and their 3 boys.  Darren is Arden’s brother and Rosie is my sister.  Our kids are double cousins and our families are really close.

Nick was just about to turn 14 and life with him was pretty constant at that time.  His seizures were under control with the various medications he took.  He was attending middle school and the teachers in his education program were really supportive.  He seemed to have topped out on his skill development, but that was ok.  We all were well used to what he could and couldn’t do and I was no longer acting like a drill sergeant.   Besides we were on vacation.

One day we were taking in the sights around Malin Head in our funny van.  It is the most northernly point of Ireland, the roads are narrow and we all were bouncing along.  Rosie was trying to encourage her young son who was almost three, to blow his nose.  My kids, being older, were “helping” their aunt by following her directions.  It was pretty funny and I am not sure that Seth was even really paying attention to his mom.  However, Nick was.

All of a sudden, he blew air through his nostrils and snot flew everywhere.  Lots of snot.  We were all startled, and disgusted.  Since the chaos that ensued with his siblings and cousins was pretty exciting to him, Nick tried it again, with the same result.  By now he was laughing so hard that he couldn’t really control his airflow and although he kept trying to blow his nose, he was actually blowing air out his mouth.

Once everyone and everything was cleaned up, and peace restored, I commented to the adults that it really was miraculous that Nick figured out how to do that.   It had been about 5 years since he had gained a new physical skill.  Gathering paper towels in case of success, I asked him if he could it again.  Pausing a moment, Nick frowned.  Then with great concentration, he did it again.  This time only air came out, which was a relief to all of us.

Even now after 25 years, he has to concentrate to have success with blowing his nose.  But he can do it still.   I didn’t understand that day how much easier life would become because he had gained the ability to control his airflow.  At the time I was frustrated at the mess that needed to be cleaned up while we were bouncing along the roads.  It was truly miraculous and is a great blessing.

Obviously hindsight can give us perspective on the true impact events have on our lives.  Now, I do try and see the bigger picture, even if the situation is frustrating.   It doesn’t always happen right away, but it is getting easier for me.