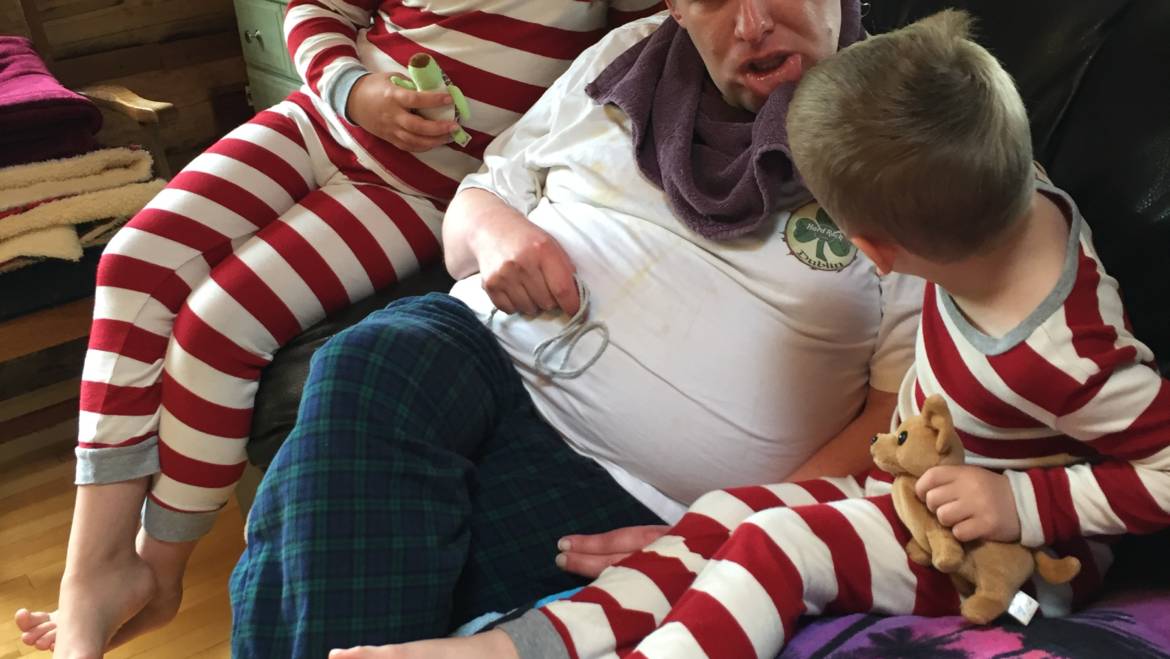 We have all had those days.  They start out great, amazing in fact.  And then somewhere in the middle, a crisis rears its ugly head.  Sometimes we are caught completely unawares and other times we know “the particular event” is coming.

Well that happened to Nick on Sunday afternoon.  To remind you of the timeline, four weeks prior, Nick had a horrible seizure experience in Ireland.  It was traumatic for him and Arden and me.  The doctors said that we needed to increase one particular medicine.  We have tried this three different times in the past few years.  Each time after three to four weeks, Nick has experienced horrible muscle weakness, to the point that he can’t walk more than a few steps before he crumples to the ground, unable to stand.  But when he is on this dose of the medication, his drop seizures and grand-mal seizures are in abeyance and so his quality of life, as far as seizures, is improved.

This is the dilemma, both scenarios have an impact on his quality of life.  Being able to walk or not having the big seizures.  The thing is, the seizures are life threatening and the not walking is an inconvenience.  It is a BIG inconvenience, but an inconvenience nonetheless.  So on the surface the answer is clear.  Go for less seizures.  That sounds great, except for the hour upon hour of frustration Nick is experiencing at not being able to move around when he wants to.  Nick is typically good-natured, but he wants to walk and he is annoyed that he randomly and unexpectedly doesn’t have the strength.

On Sunday, Nick had a wonderful morning and afternoon.  His niece Madi and nephew Bridger had stayed overnight Saturday night.  We had a special breakfast in the morning and played games.  After lunch, we all went to choir practice and attended church.  All of his favorite things.  He was doing just fine.

Then we got home.  In a few steps up the stairs, he began to falter.  Half way up, he was pulling himself up by the handrail with Arden pushing behind and me pulling from the front.  Two steps from the top, he couldn’t go any more and between Arden and I we hefted him up to the top landing.  It was awful.  He was lying on his stomach, unable to move.  I didn’t know what we were going to do.  He was asking, “You help me, you help me.” Arden and I kept talking to him, reassuring him that we would help him.  Since he is a big man and the space was tight, I couldn’t see a solution.  I felt like I was lying to my son.

After about three or four minutes of him resting there, he began to make some movements.  He was trying to push himself up onto his hands and knees.  Arden and I were then able to pull up his hips and support his shoulders so he could balance on his hands.  We encouraged him and supported him physically and he was able to crawl the five feet to his bed.  Then we got him up onto his bed.  We were all relieved.  Nick said, “Whew, that was close.”  We laughed at the comic relief, but still Arden and I didn’t feel it was funny.

We do have a stair lift on that stairwell, we also have support belts to help with transfers etc.  Nick doesn’t like using those things.  He wants to have some independence and we try to give it to him.  At the same time we work to keep him safe.  Some days it is a very fine line between those two things.

Nick is on a very strict diet and usually Arden and I are very good at giving him just what he should have.  Well about an hour later, we had changed Nick into his ‘play clothes.’ We used the stair lift to take him downstairs.  We put him in the wheelchair to get him to the dining room and sat him at the table with his favorite new game, Appletters.  I have blogged about them recently.  He seemed happy, but Arden and I weren’t done.

I decided that Nick needed something else, so I went to the frig.  (After all, when I am having a hard day, I tend to feed myself a treat, right?)  I put some jello in a bowl, which he loves, and added whipped cream to the top.  As I was setting it in front of Nick, I noticed that Arden had made him some chocolate milk, another favorite.  Smiling, I thought, both Arden and I have the same idea.  Let’s spoil Nick day.  Well Bridger, who is four years old, asked, “Why does Uncle Nick get to have dessert before we have dinner?”  Throwing caution to the wind, (his parents weren’t there yet) I asked if he wanted to have some dessert before dinner too, and of course the answer was in the affirmative.  Madi wanted some too.

I know I wasn’t modeling a good response to a stressful situation.  But at that moment I didn’t care.  While the kids were all eating their early dessert, Arden and I hugged each other for support.  I have apologized to Bridger and Madi’s mother about the bad behavior model, but some days are just like that.

We are all better now.  Not that Nick is stronger, he still is using the stair lift and the wheel chair, but when there is a change is life’s routine, after a few days, it does become the new normal and we adjust while we do what is necessary.

So remember when things do go south, and they will to all of us in various ways, we will have our initial response.  Then somehow over time we do adjust and often find that we are stronger than we could have believed possible.  Also it is ok to cry on someone else’s shoulder too.