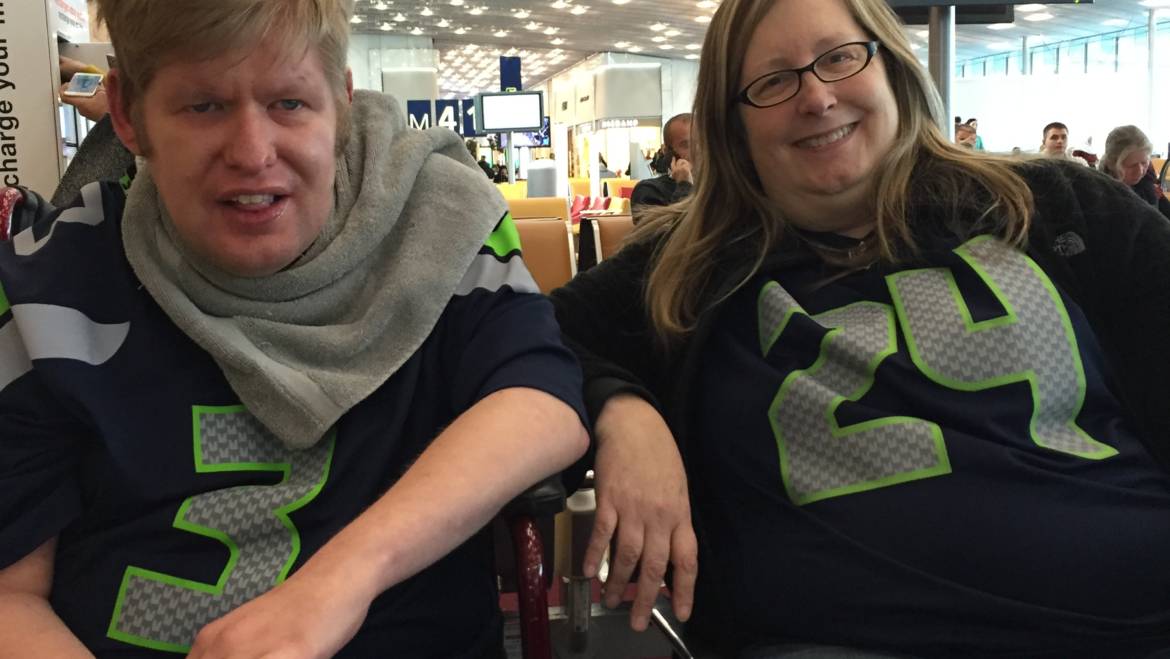 Nick is a big fan of the Seattle Seahawks.  He loves watching them play football.  He sometimes disagrees with the refs and will yell at the TV if he thinks that the pass was really incomplete.  Some times you might think that he is not paying attention, but he is following the game very closely.  When the Super Bowl is over, he is sad that there are not games to watch until August Pre-Season starts.  It is really fun to watch games with him.

Around the Puget Sound area the Seahawk fans are called “the 12’s.” It is said that the enthusiastic support of the fans in Seattle is just like the Hawks have a 12th man on the field, we give our team an advantage.  Or so we think.  In any case, Fridays in Seattle, during football season are known as “Blue Fridays,” and you will see people wearing jerseys and other regalia in open support of our team.

For Christmas one year, Nick’s siblings decided to purchase him a jersey.  They are pricey!  Arden wasn’t sure that Nick would understand how cool it was.  So since it was an expensive gift, I decided to ask Nick if he would want to have a Hawks jersey.  He said “yes, A Blue one.” That is the color of the home jerseys.  Arden was telling Karen that it probably didn’t matter to Nick which one he got, but I thought we should ask Nick that too.  He certainly expressed his opinion on that too.  Nick said, “I get number 3.”  Arden wondered aloud if Nick knew who number 3 was, Nick looked over at him as if he was being silly and said, “Number 3 is Russell Wilson, the quarterback.”  We all laughed.  I had told Arden that Seahawk football was important to Nick.

We take our jerseys with us when we travel during football season.  Well, we were in the Paris airport two years ago, leaving to come home on a Friday in November, and of course, Nick insisted that we had to wear our jerseys on the plane home.  We did get a few weird looks, but more often than not, we received thumbs-up from other passengers as we showed our support of Hawks.

It is very fun for me to have someone to watch football games with, but what is even more wonderful is to watch my son, able to completely participate in an activity that is 100% normal and age appropriate, with no modifications needed.  I count it as an incredible blessing.